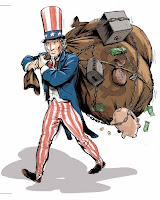 Students at Yale have started a new journal, called the Yale Journal of Economics, which aims to publish the best undergraduate papers, not just from Yale, but from any school. Click on the link to read the first issue or to find out how to submit.  The editors hope professors will encourage their students who write noteworthy papers to send them in.

Yesterday, I had the pleasure of being the featured speaker at the event where the inaugural issue was released.  Below is a picture of me with the new journal's editorial board after a dinner at Mory's, the classic Yale eating establishment. 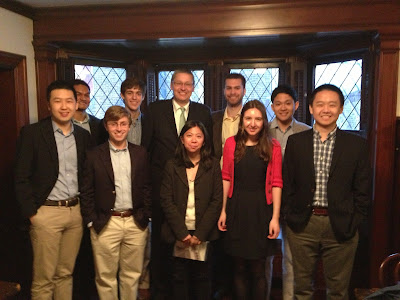 What is the purpose of insurance?

A friend points me to this passage:

At a White House briefing Tuesday, Health and Human Services Secretary Kathleen Sebelius said some of what passes for health insurance today is so skimpy it can't be compared to the comprehensive coverage available under the law. "Some of these folks have very high catastrophic plans that don't pay for anything unless you get hit by a bus," she said. "They're really mortgage protection, not health insurance."

I have the same problem with my other insurance policies.  My homeowner insurance doesn't cover the cost when my gutters need cleaning, and my car insurance doesn't cover the cost when I need to fill the tank with gas. Instead, the policies cover only catastrophic events, like my house burning down or a major accident. Now that the Obama administration has fixed the health insurance system, I trust they will soon move on to solve these other problems.
Diposting oleh Unknown di 07.37 Tidak ada komentar: 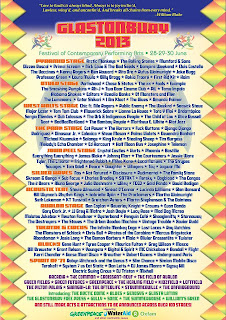 Toro Y Moi will be performing at this summer's Glastonbury Festival happening June 28th - 30th in the Vale of Avalon. 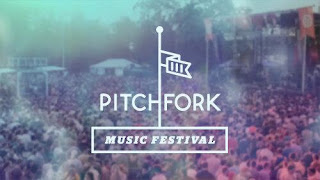 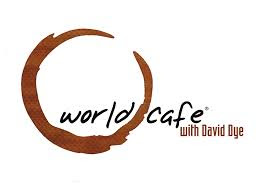 Toro Y Moi was featured in the latest installment of World Café with performances of "High Living,""Say That,"and "Grown Up Calls."

New video for "Never Matter" is up today on Gorilla vs. Bear today. Purchase Anything In Return at iTunes.

The Economist as Advice Columnist 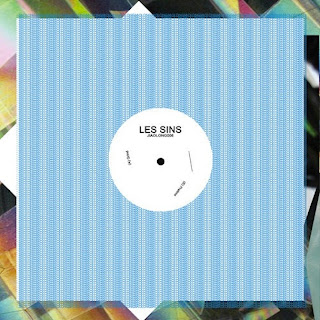 The Economist as Civil Libertarian

The Best Job Opportunity Ever

The Harvard economics department is now recruiting teaching fellows for its popular undergraduate principles course, Ec 10, for the next academic year.  If you are a Boston-area graduate student with a solid background in economics, please consider interviewing for the chance to introduce the next Andrei Shleifer, Ben Bernanke, or Marty Feldstein (all former Ec 10 students) to the power of economic thinking.

In a blog post about the minimum wage, Bryan Caplan makes note of a tension in some of David Card's research.  For those who don't know him, Card is one of the great empirical labor economists of his generation.  In some of his research, joint with Alan Krueger, Card finds that increases in the minimum wage have negligible effects on employment.  In other research, on the Mariel boatlift, Card finds that increases in the supply of unskilled workers have negligible effects on wages and employment of existing workers.

Caplan notes that these results are hard to reconcile: The former suggests that labor demand is highly inelastic, whereas the latter suggests it is highly elastic.  That is a very good point.  While I was well aware of Card's famous research on these topics, I had not put them together and recognized the tension between them.

To me, this brought to mind an econometrics class I took from Frank Fisher many years ago.  Frank used to say that the "iron law of econometrics" is that coefficients are biased toward zero.  He meant that various problems, such as measurement error and misspecification, tend to make it hard for researchers to find an effect even when one really exists.  Fisher's "law" overstates things, which was Frank's style, but his basic point is often right.
Diposting oleh Unknown di 01.00 Tidak ada komentar:

US News and World Report has released its updated rankings of graduate programs in economics.  Click here to see them.  The top programs are:

Thanks to our friends over at Marginal Revolution for both pointers.
Diposting oleh Unknown di 08.16 Tidak ada komentar:

Thanks to Moog Sound Lab.

A terrific, very quick, and nontechnical introduction in economics (more macro than micro) is Greg Ip's Little Book of Economics.  In case you don't know him, Greg writes for The Economist magazine and was previously at the Wall Street Journal.  He now has a new edition of his book, together with an online guide to suggested readings.
Diposting oleh Unknown di 15.10 Tidak ada komentar: 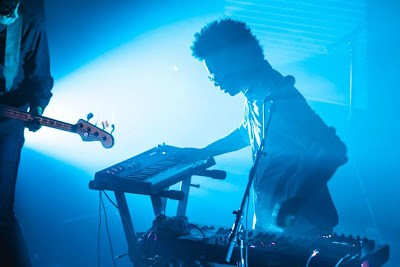 Here's where you can find Toro Y Moi at SXSW:

Comic of the Day (Not completely fair, but funny nonetheless) 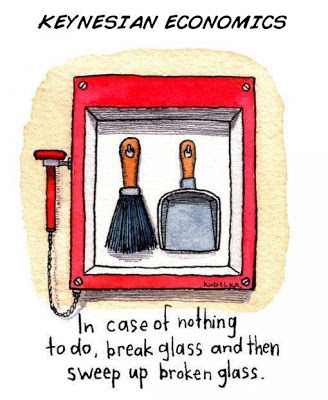 Update: A reader suggests an edit of the above Bastiat-inspired comic. 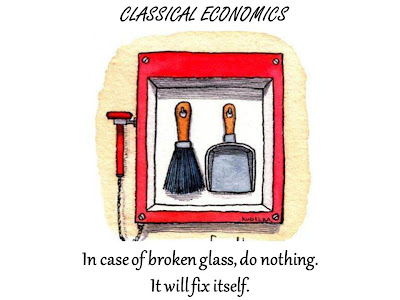 Christy Romer on the Minimum Wage

I agree with a lot of it.  She concludes with a view that is common among economists: An expansion in the earned income tax credit would be a lot better than an increase in the minimum wage.  I would have added a related fact: Over the years, we have already seen substantial expansions in the EITC.  (See below.) Since we already have the better policy, let's not pursue the worse one.

A Lecture on Income Inequality

A student emails me a question:

I have read all the advice on your blog, and have not found an answer to the following question. With some modifications I think it's a question a few pre-PhDs from Harvard/MIT/etc. have, so I hope I'm not being too selfish in asking.

Suppose, for the sake of argument, that I have good reason to believe I'm in the top 1% of academic-economists-to-be in my generation, possibly better.

Suppose further that I want to devote my career to important, and mostly policy-relevant, research. In the medium term I just want to be an academic (professor with tenure), but in the long term I'd want to do the sort of government roles you've done.

I have an offer to work for a management consulting firm for two years. Or I can start my PhD next year. Should I take the former option, with the aim of learning 'how the world works', how to prioritise/listen/implement, etc., or should I just complete my PhD as quickly as possible? It seems I could get away with a short stint in the private sector now, whereas there'd be no chance post-PhD on the academic track. But then the opportunity cost of two years in early 20s not doing maths is also high. I'd be very grateful for your reflections, however brief.

Great question.  Unfortunately, there is no clear answer.  I have known successful economists who have followed each of the two paths you describe.

The best path depends on your goals.  If your goal were to be a purely academic economist doing more abstract research, then taking off time before grad school is likely a mistake.  That is, if you were trying to maximize the number of publications in Econometrica and the likelihood of winning a Nobel, then go straight to graduate school, get your degree, and start writing those papers.

On the other hand, if your goal is to be the kind of economics professor who engages more directly with the real world, as it seems to be, then some real-world experience is indeed helpful.  It broadens your perspective, and it teaches you the skills to understand and communicate with non-economists.

Two years, however, is probably longer than is optimal.  My guess is that you will run into rapidly diminishing marginal value from the experience by the end of the first year.

Moreover, a PhD these days often takes five years and sometimes more.  That argues for starting sooner rather than later.  My experience is that as people start approaching the age of 30, their tolerance for living the life of a grad student declines significantly.  As marriage and children start entering your thoughts, you begin to want a real job and a grown-up income.  That may be hard to imagine now while you are a college student, but these thoughts will creep up on you faster than you think and when you least expect it.
Diposting oleh Unknown di 03.18 Tidak ada komentar: